To be honest, I really wish we had had time to read The Big Blowdown! Maybe it was just me, but I kept noticing little things that seemed to reference other novels that we had read this semester, even if they were tiny little things, such as “Miller’s on F” from page 62. Hell, there’s a characters named “Nick” in there, as well as a “Vera”! whether is was accidental or purposeful, The Big Blowdown has quite a few references to other novels. Maybe Pelecanos did some research on the 1930s and 1940s before he wrote this novel?

Anyway, The big Blowdown was a spectacular example of the 1940s noir novels that we have been reading. I thought that it was actually one of the most enlightening; because it incorporated so many of the little quirks that many of the other novels we read are famous for, this novel would have been perfect for a “big-picture” type of lesson.

The only thing I didn’t like about the book was that Pelecanos began almost every new chapter with a name. That was definitely helpful in keeping track of who the chapter was about, but for some reason, I wish there had been a little bit more class in the transitions. He probably did it to keep the novel as basic and hardboiled as possible, as there was so much going on at once that otherwise, it probably would have been confusing. 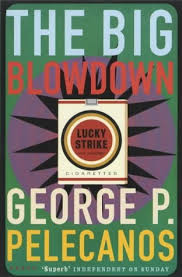