The Set-Up: Round two 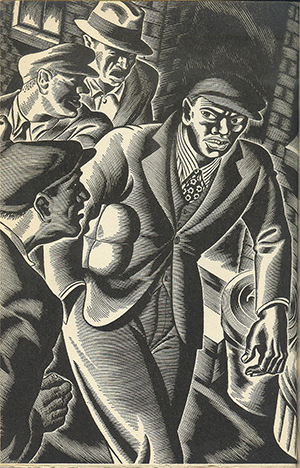 Last week I blogged a bit about the film version of The Set-Up, so I thought I should take the time to read the book. The book and the film have similarities and differences, which Jefferson Hunter detailed far better than I can. The hero of the book is a black boxer named Pansy Jones. In the movie he’s a white guy named Stoker Thompson, played by Robert Ryan. Pretty much all of the racial aspects of the poem were whitewashed by Hollywood. Apparently some of the language in the book was toned down when it was reissued in the 60s, but I found an old yellowed copy from 1931. This opening illustration sets the stage well. At first glance, we see that it’s dark, crowded and claustrophobic. Looking closer we see that the figures are unnaturally close, jammed up against each other, and there’s something twisted in the perspective: Compare the angle at which we view the main character’s face with the angle from which we see the garbage cans, and the window in the back. It’s dizzying, closed in, with no way to back out.

Here’s a couple pages. I think the yellowing adds something to it – you know you’re looking at a different era. The typography does something too, emphasizing the staccato rhythm, making it read like a boxing match full of individual blows and short flurries of punches. I wonder what it would sound like as beatnik jazz poetry. 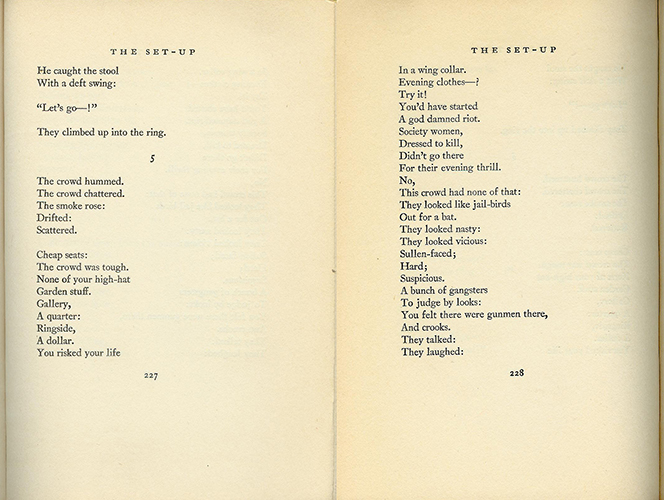 This entry was posted in Hardboiled, noir, Set-Up. Bookmark the permalink.