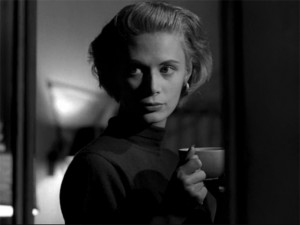 Not a femme fatale

Last evening I watched Killer’s Kiss, a 1955 film by Stanley Kubrick. It’s his second film, made when he was only 26 (the bastard). Is this really noir? It has all the elements – darkness, death, dysfunction, criminals, voice-over narration, hapless people in hopeless lives – but then there’s this happy ending thing that turns it into a good guy rescues damsel in distress and they all live happily ever after fairy tale. The ending seems tacked on, and the Wikipedia entry implies that it was, but they don’t have anything to back up that claim. I searched for a while, but I couldn’t find anything to support the statement either. That whole “What does it all mean?” thing gets killed in the end. So is it noir or just noir-ish?

It looks noir, with the lighting and camera angles. I love the richness of tone that Kubrick gets in his photography. There’s a sense of isolation or desolation as well. The story is set in the bustling metropolis of New York City, but so many scenes make the city look empty – no passers-by, no bystanders, no traffic. All the sound is overdubbed and it shows, which gives it a weird foreign-film feel. And they all live happily ever after. (Awwww, isn’t that nice.) There’s a scene at the beginning where the two lead characters descend staircases to the street. I thought this might signify spiraling downward into trouble. A street with almost no traffic. Not a femme fatale. The story climaxes with an axe vs. spear duel in a mannequin warehouse. The severed heads and hands give us ideas. I loved this scene – the killing. Three shadows go down the alley, two come out. The low-angle shot. This guy could be trouble.
This entry was posted in Hardboiled, Kubrick, noir. Bookmark the permalink.