In the beginning of Mildred Pierce, written by James M. Cain, I was not very intrigued by the story. It is no doubt a tremendous book that was very well put together, but it is indeed much slower paced than books we have read in the past, like Dashiell Hammett’s Red Harvest among other things. But, like “Ask the dust”, by John Fante, once I read the first half on the book and really reflected on what I read, I appreciated the tale much more. 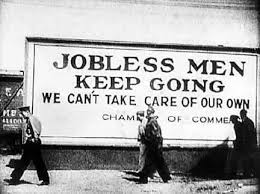 Mildred Pierce is an incredible woman who keeps her cool while being a single unemployed Californian mother with two girls  in the heat of the Great Depression. Her husband cheats on her and is now out of her life but she still remain cool under such pressure. She makes some desperate and less than desirable maneuvers to keep her children alive but surprisingly, remains fairly calm the entire time compared to what other people’s reactions would be. On top of all of that, Mildred is able to beat the odds and get a job as a single mother, which made it even harder for her to own a job. In my mind, Mildred Pierce is on par with Rosie the Riveter. Simply because, she is tough, and she knows what she needs to do and she gets it done at whatever cost it may be. Not in a killer, seducer, hard-boiled kinda way, but in a way that she has to put up with all of the events going on around her, and she is still able to do what is best from her family of three people. This, if you ask me, makes her one of the more admirable characters we have studied this semester. While other characters may be more fun to observe, or more intelligent, Mildred Pierce has been thrown into a situation that I believe many of the other characters would not survive.